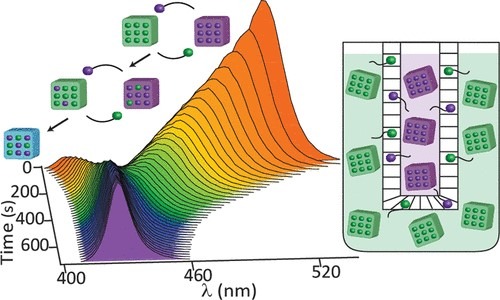 s. Similarly, cross-anion exchange can occur upon mixing NCs of different perovskite halides. This process, though, is detrimental for applications requiring perovskite NCs with different halides in close proximity. We study the effects of various stabilizing surface ligands on the kinetics of the cross-anion exchange reaction, comparing zwitterionic and ionic ligands. The kinetic analysis, inspired by the “cage effect” for solution reactions, showcases a mechanism where the surface capping ligands act as anion carriers that diffuse to the NC surface, forming an encounter pair enclosed by the surrounding ligands that initiates the anion exchange process. The zwitterionic ligands considerably slow down the cross-anion exchange process, and while they do not fully inhibit it, they confer improved stability alongside enhanced solubility relevant for various applications.

Colloidal quantum dots (CQDs), major building blocks in modern optoelectronic devices, have so far been synthesized with only one emission center where the exciton resides. Recent development of coupled colloidal quantum dots molecules (CQDM), where two core–shell CQDs are fused to form two emission centers in close proximity, allows exploration of how charge carriers in one CQD affect the charge carriers in the other CQD. 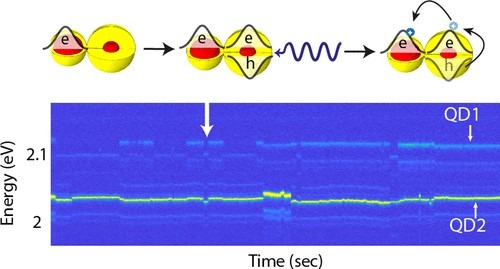 Cryogenic single particle spectroscopy reveals that while CQD monomers manifest a simple emission spectrum comprising a main emission peak with well-defined phonon sidebands, CQDMs exhibit a complex spectrum with multiple peaks that are not all spaced according to the known phonon frequencies. Based on complementary emission polarization and time-resolved analysis, this is assigned to fluorescence of the two coupled emission centers. Moreover, the complex peak structure shows correlated spectral diffusion indicative of the coupling between the two emission centers. Utilizing Schrödinger-Poisson self-consistent calculations, we directly map the spectral behavior, alternating between neutral and charged states of the CQDM. Spectral shifts related to electrostatic interaction between a charged emission center and the second emission center are thus fully mapped. Furthermore, effects of moving surface charges are identified, whereby the emission center proximal to the charge shows larger shifts. Instances where the two emission centers are negatively charged simultaneously are also identified. Such detailed mapping of charging states is enabled by the coupling within the CQDM and its anisotropic structure. This understanding of the coupling interactions is progress toward quantum technology and sensing applications based on CQDMs.

Surface ligands of semiconductor nanocrystals (NCs) play key roles in determining their colloidal stability and physicochemical properties and are thus enablers also for the NCs flexible manipulation toward numerous applications. 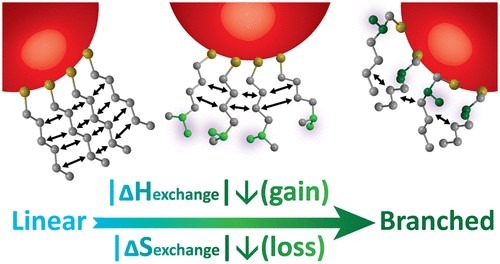 Attention is usually paid to the ligand binding group, while the impact of the ligand chain backbone structure is less discussed. Using isothermal titration calorimetry (ITC), we studied the effect of structural changes in the ligand chain on the thermodynamics of the exchange reaction for oleate coated CdSe NCs, comparing linear and branched alkylthiols. The investigated alkylthiol ligands differed in their backbone length, branching position, and branching group length. Compared to linear ligands, lower exothermicity and entropy loss were observed for an exchange with branched ligands, due to steric hindrance in ligand packing, thereby justifying their previous classification as “entropic ligands”. Mean-field calculations for ligand binding demonstrate the contribution to the overall entropy originating from ligand conformational entropy, which is diminished upon binding mainly by packing of NC-bound ligands. Model calculations and the experimental ITC data both point to an interplay between the branching position and the backbone length in determining the entropic nature of the branched ligand. Our findings suggest that the most entropic ligand should be a short, branched ligand with short branching group located toward the middle of the ligand chain. The insights provided by this work also contribute to a future smarter NC surface design, which is an essential tool for their implementation in diverse applications.

Semiconductor–metal hybrid nanostructures are promising materials for photocatalytic applications, providing high efficiencies compared to their composing counterparts. So far, the synthesis of such hybrid nanoparticles was limited to batch reactors, achieving tunability while demonstrating how each of the nanocrystals’ characteristics affects photocatalytic performances.

Yet, new methodologies should be established to increase the synthetic yield while maintaining high control over the resulting structures. Herein, scalable advanced flow techniques are introduced, yielding ZnSe–metal hybrid nanoparticles either in a thermal growth or photo-induced growth regime. Firstly, thermal gold growth in the flow reactor is achieved with good control over the metal tip size and the nanoparticle morphology. We address the dependence of the reaction on temperature, the precursor to nanorod molar ratios, and additional parameters. Additionally, light-induced growth by the flow reactor is demonstrated for platinum clusters. The quality of the resulting hybrids is directly demonstrated by their functionality in photocatalytic hydrogen generation by water reduction, displaying enhanced activity compared to bare ZnSe nanorods. The fairly straightforward adaptation of such powerful flow-reaction techniques to scale-up photocatalytic hybrid nanoparticle syntheses takes them one step forwards towards the realization of their potential in real-life application scenarios.