CuInS2 nanocrystals with the wurtzite structure show promise for applications requiring efficient energy transport due to their anisotropic crystal structure. We investigate the source of photoluminescence in the near-infrared spectral region recently observed from these nanocrystals. Spectroscopic studies of both wurtzite CuInS2 itself and samples alloyed with Cd or Zn allow the assignment of this emission to a radiative point defect within the nanocrystal structure. Further, by varying the organic passivation layer on the material, we are able to determine that the atomic species responsible for nonradiative decay paths on the nanocrystal surface are Cu- or S-based. Density functional theory calculations of defect states within the material allow identification of the likely radiative species. Understanding both the electronic structure and optical properties of wurtzite CuInS2 nanocrystals is necessary for their efficient integration into potential biological, photovoltaic, and photocatalytic applications.

The effect of Cu impurities on the absorption cross section, the rate of hot exction thermalization, and on exciton recombination processes in InAs quantum dots was studied by femtosecond transient absorption. Our findings reveal dynamic spectral effects of an emergent impurity sub-band near the bottom of the conduction band. Previously hypothesized to explain static photophysical properties of this system, its presence is shown to shorten hot carrier relaxation. Partial redistribution of interband oscillator strength to sub-band levels reduces the band edge bleach per exciton progressively with the degree of doping, even though the total linear absorption cross section at the band edge remains unchanged. In contrast, no doping effects were detected on absorption cross sections high in the conduction band, as expected due to the relatively high density of sates of the undoped QDs.

Semiconductor–metal hybrid nanoparticles manifest efficient light-induced spatial charge separation at the semiconductor–metal interface, as demonstrated by their use for hydrogen generation via water splitting. Here, we pioneer a study of their functionality as efficient photocatalysts for the formation of reactive oxygen species. We observed enhanced photocatalytic activity forming hydrogen peroxide, superoxide, and hydroxyl radicals upon light excitation, which was significantly larger than that of the semiconductor nanocrystals, attributed to the charge separation and the catalytic function of the metal tip. We used this photocatalytic functionality for modulating the enzymatic activity of horseradish peroxidase as a model system, demonstrating the potential use of hybrid nanoparticles as active agents for controlling biological processes through illumination. The capability to produce reactive oxygen species by illumination on-demand enhances the available peroxidase-based tools for research and opens the path for studying biological processes at high spatiotemporal resolution, laying the foundation for developing novel therapeutic approaches.

Metal–semiconductor hybrid nanoparticles (NPs) offer interesting synergistic properties, leading to unique behaviors that have already been exploited in photocatalysis, electrical, and optoelectronic applications. A fundamental aspect in the synthesis of metal–semiconductor hybrid NPs is the possible diffusion of the metal species through the semiconductor lattice. The importance of understanding and controlling the co-diffusion of different constituents is demonstrated in the synthesis of various hollow-structured NPs via the Kirkendall effect. Here, we used a postsynthesis room-temperature reaction between AuCl3 and InAs nanocrystals (NCs) to form metal–semiconductor core–shell hybrid NPs through the “reversed Kirkendall effect”. In the presented system, the diffusion rate of the inward diffusing species (Au) is faster than that of the outward diffusing species (InAs), which results in the formation of a crystalline metallic Au core surrounded by an amorphous, oxidized InAs shell containing nanoscale voids. We used time-resolved X-ray absorption fine-structure (XAFS) spectroscopy to monitor the diffusion process and found that both the size of the Au core and the extent of the disorder of the InAs shell depend strongly on the Au-to-NC ratio. We have determined, based on multielement fit analysis, that Au diffuses into the NC via the kick-out mechanism, substituting for In host atoms; this compromises the structural stability of the lattice and triggers the formation of In–O bonds. These bonds were used as markers to follow the diffusion process and indicate the extent of degradation of the NC lattice. Time-resolved X-ray diffraction (XRD) was used to measure the changes in the crystal structures of InAs and the nanoscale Au phases. By combining the results of XAFS, XRD, and electron microscopy, we correlated the changes in the local structure around Au, As, and In atoms and the changes in the overall InAs crystal structure. This correlative analysis revealed a co-dependence of different structural consequences when introducing Au into the InAs NCs. Therefore, this study of diffusion effects in nanocrystals has relevance to powerful concepts in solid-state nanochemistry related to processes of cation exchange, doping reactions, and diffusion mechanisms. 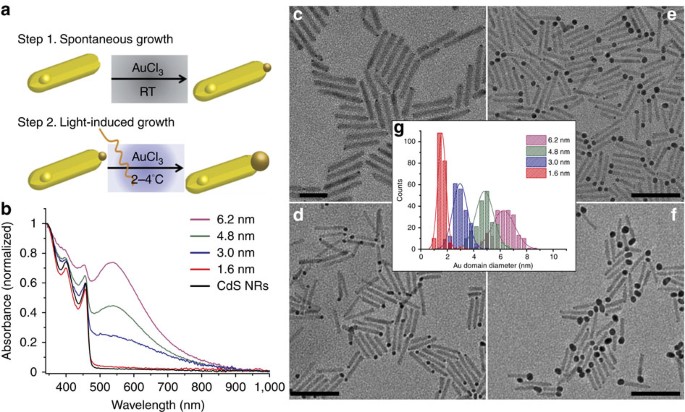 Semiconductor-metal hybrid nanostructures offer a highly controllable platform for light-induced charge separation, with direct relevance for their implementation in photocatalysis. Advances in the synthesis allow for control over the size, shape and morphology, providing tunability of the optical and electronic properties. A critical determining factor of the photocatalytic cycle is the metal domain characteristics and in particular its size, a subject that lacks deep understanding. Here, using a well-defined model system of cadmium sulfide-gold nanorods, we address the effect of the gold tip size on the photocatalytic function, including the charge transfer dynamics and hydrogen production efficiency. A combination of transient absorption, hydrogen evolution kinetics and theoretical modelling reveal a non-monotonic behaviour with size of the gold tip, leading to an optimal metal domain size for the most efficient photocatalysis. We show that this results from the size-dependent interplay of the metal domain charging, the relative band-alignments, and the resulting kinetics.