The ability to tailor the properties of semiconductor nanocrystals through creating core/shell heterostructures is the cornerstone for their diverse application in nanotechnology. The band-offsets between the heterostructure components are determining parameters for their optoelectronic properties, dictating for example the degree of charge-carrier separation and localization. So far, however, no method was reported for direct measurement of these factors in colloidal nanocrystals and only indirect information could be derived from optical measurements. Here we demonstrate that scanning tunneling spectroscopy along with theoretical modeling can be used to determine band-offsets in such nanostructures. Applying this approach to CdSe/CdS quantum-dot/nanorod core/shell nanocrystals portrays its type I band structure where both the hole and electron ground state are localized in the CdSe core, in contrast to previous reports which predicted electron delocalization. The generality of the approach is further demonstrated in ZnSe/CdS nanocrystals where their type II band alignment, leading to electron−hole separation, is manifested.

The use of inorganic charge transport layers has enabled the fabrication of bright, environmentally stable LEDs that are based on electrically pumped colloidal solutions of quantum dots.

A radiationless transition process of long-range, resonance interconversion of electronic-to-vibrational energy transfer (EVET) is discovered between the band-gap excitation of nanocrystal quantum dots to matrix vibrational overtone modes using fluorescence lifetime measurements. A theoretical analysis based on long-range dipole-dipole nonadiabatic couplings, being distinct from the traditional adiabatic or "static-coupling" pictures, is given and is in qualitative agreement with experiments. EVET should be considered in matrix choices for near-infrared optoelectronic applications of nanocrystals.

Visible light photocatalysis is a promising route for harnessing of solar energy to perform useful chemical reactions and to convert light to chemical energy. Nanoscale photocatalytic systems used to date were based mostly on oxide semiconductors aided by metal deposition and were operational only under UV illumination. Additionally, the degree of control over particle size and shape was limited. We report visible light photocatalysis using highly controlled hybrid gold-tipped CdSe nanorods (nanodumbbells). Under visible light irradiation, charge separation takes place between the semiconductor and metal parts of the hybrid particles. The charge-separated state was then utilized for direct photoreduction of a model acceptor molecule, methylene blue, or alternatively, retained for later use to perform the reduction reaction in the dark.

Apertureless near-field scanning optical microscopy, along with time-resolving capabilities, is used to produce optical imaging and spectroscopy measurements of single-semiconductor nanocrystals, in correlation with the AFM topography scan. The strongly distance-dependent energy transfer between the excited particle and silicon or metallic-coated AFM tips provides a contrast mechanism for subdiffraction-limited optical imaging. Fluorescence lifetime optical images show excellent contrast, sharpness, sensitivity, and resolution equivalent to that of the AFM topography images (sub 20 nm) and significantly improved over fluorescence intensity images. The sharper resolution of lifetime images is consistent with model predictions of energy transfer between an emitting dipole and a dielectric surface. Lifetime images also enable resolving multiple emitters located in the excitation spot. The comprehensive time and distance dependent data is used to study the imaging mechanism and the properties of silicon tips and platinum-coated tips as energy acceptors and quenchers. The findings provide a basis for use of lifetime imaging, in conjunction with apertureless near field microscopy, for simultaneous high-resolution topography and optical imaging. 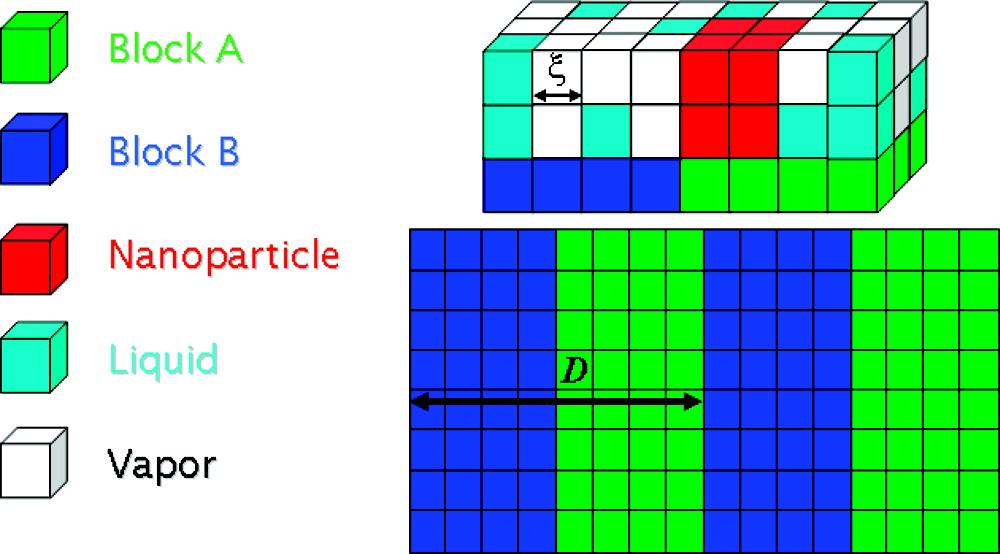 A coarse-grained lattice gas model is developed to study the drying-mediated self-assembly of nanoparticles on diblock copolymer substrates. The model describes the nanoparticles, the solvent and the diblock copolymer on length scales that are typical to the solvent bulk correlation length. Monte Carlo simulation techniques are used to delineate the various mechanisms of this out-of-equilibrium hierarchical self-assembly. Several different assembly scenarios corresponding to different selectivity of the nanoparticles/liquid/substrate are discussed. The role of surface tension, evaporation rate, diffusion rate, nanoparticle coverage, and diblock copolymer periodicity is explored. Optimal conditions to form a stripe phase of nanoparticles along with predictions of novel 3D structures resulting from high nanoparticle and solvent selectivity are described.

We studied the electronic level structure of assemblies of InAs quantum dots and CdSe nanorods cross-linked by 1,4-phenylenediamine molecules using scanning tunneling spectroscopy. We found that the bandgap in these arrays is reduced with respect to the corresponding ligand-capped nanocrystal arrays. In addition, a pronounced sub-gap spectral structure commonly appeared which can be attributed to unpassivated nanocrystal surface states or associated with linker-molecule-related levels. The exchange of the ligands by the linker molecules also affected the structural array properties. Most significantly, clusters of close-packed standing CdSe nanorods were formed.