A blue solid-state laser material based on 4,4′4′ dibenzyl carbamido stilbene-2,2′2′ disulfonic acid incorporated into solgel zirconia and inorganic–organic hybrid matrices is presented. The absorption maxima of the dye in various matrices are around 339–361 nm, and the broad fluorescence peaks are at 411–413 nm. Optical gain measurements using the variable stripe method show amplified spontaneous emission peaking at 437 nm.

Gold-tipped CdSe rods (nanodumbbells) were solubilized in an aqueous phase and self-assembled in a head-to-tail manner using biotin disulfide and avidin. The disulfide end of the biotin molecule attaches to the gold tip of the nanodumbbell, and the biotin end of the molecule is able to conjugate to an avidin protein. The avidin can strongly conjugate up to four biotin molecules. Changing the ratios of biotin to nanodumbbells leads to the formation of dimers, trimers, and flowerlike structures. To further improve the distribution of chain lengths, a separation method based upon weight was applied using a concentration gradient. The gold tips provide effective anchor points for constructing complex nanorod structures by self-assembly.

The electronic level structure of colloidal InAs quantum dots (QDs) in two-dimensional arrays, forming a QD-solid system, was probed using scanning tunneling spectroscopy. The band gap is found to reduce compared to that of the corresponding isolated QDs. Typically, the electron (conduction-band) ground state red shifts more than the hole (valence-band) ground state. This is assigned to the much smaller effective mass of the electrons, resulting in stronger electron delocalization and larger coupling between electron states of neighboring QDs compared to the holes. This is corroborated by comparing these results with those for InAs and CdSe nanorod assemblies, manifesting the effects of the electron effective mass and arrangement of nearest neighbors on the band gap reduction. In addition, in InAs QD arrays, the levels are broadened, and in some cases their discrete level structure was nearly washed out completely and the tunneling spectra exhibited a signature of two-dimensional density of states.

CdSe/ZnS QDs enable the optical probing of the biocatalytic oxidation of tyrosine derivatives and of the scission of peptides by thrombin. CdSe/ZnS QDs were modified with tyrosine methyl ester or with a tyrosine-containing peptide. The tyrosine units were reacted with tyrosinase/O2 to yield the respective l-DOPA and quinone derivatives. The luminescence of QDs modified by the enzyme-generated quinone units is quenched. The quinone-functionalized peptide associated with the QDs was cleaved by thrombin, a process that restored the luminescence of the QDs.

The photo-induced enhancement of second harmonic generation and the effect of nanocrystal shape and pump intensity on confined acoustic phonons in semiconductor nanocrystals have been investigated with time-resolved scattering and absorption measurements. The second harmonic signal showed a sublinear increase of the second-order susceptibility with respect to the pump pulse energy, indicating a reduction of the effective one-electron second-order nonlinearity with increasing electron−hole density in the nanocrystals. The coherent acoustic phonons in spherical and rod-shaped semiconductor nanocrystals were detected in a time-resolved absorption measurement. Both nanocrystal morphologies exhibited oscillatory modulation of the absorption cross section, the frequency of which corresponded to their coherent radial breathing modes. The amplitude of the oscillation also increased with the level of photoexcitation, suggesting an increase in the amplitude of the lattice displacement as well.

We investigate the modification of photoluminescence (PL) from single semiconductor nanocrystal quantum dots (NCs) in the proximity of metal and semiconducting atomic force microscope (AFM) tips. The presence of the tip alters the radiative decay rate of an emitter via interference and opens efficient nonradiative decay channels via energy transfer to the tip material. These effects cause quenching (or enhancement) of the emitter's PL intensity as a function of its distance from the interacting tip. We take advantage of this highly distance-dependent effect to realize a contrast mechanism for high-resolution optical imaging. AFM tips are optimized as energy acceptors by chemical functionalization with InAs NCs to achieve optical resolution down to 30 nm. The presented experimental scheme offers high-resolution optical information while maintaining the benefits of traditional AFM imaging. We directly measure the PL intensity of single NCs as a function of the tip distance. Our results are in good agreement with calculations made by a classical theoretical model describing an oscillating dipole interacting with a planar mirror. 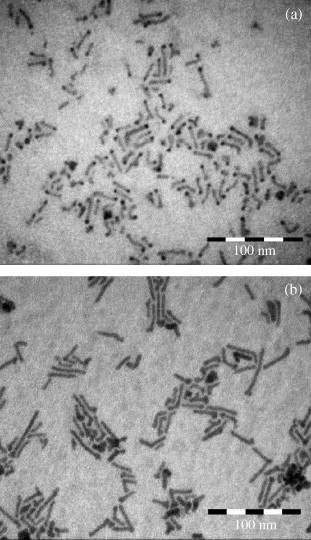 A synthesis of soluble III–V semiconductor quantum rods using gold nanoparticles to direct and catalyze one-dimensional growth isdeveloped. The growth takes place via the solution–liquid–solid (SLS) mechanism where proper precursors are injected into a coordinatingsolvent. We report the synthesis of InP nanorods using indium acetate and myristic acid with gold nanoparticles as the catalysts in the SLS growthmode. A similar route was successfully developed for the growth of InAs nanorods. We find that the amount of Au catalyst in the reaction is animportant parameter to achieve shape control. Transmission electron microscope (TEM) images of InP and InAs nanocrystals revealed that thecrystals are mostly rod-shaped, and provide strong evidence for Au presence in one edge. The rods were characterized structurally using X-raydiffraction and high-resolution TEM and optically by absorption and photoluminescence.D2005 Elsevier B.V. All rights reserved.

We explore the growth mechanism of gold nanocrystals onto preformed cadmium sulfide nanorods to form hybrid metal nanocrystal/semiconductor nanorod colloids. By manipulating the growth conditions, it is possible to obtain nanostructures exhibiting Au nanocrystal growth at only one nanorod tip, at both tips, or at multiple locations along the nanorod surface. Under anaerobic conditions, Au growth occurs only at one tip of the nanorods, producing asymmetric structures. In contrast, the presence of oxygen and trace amounts of water during the reaction promotes etching of the nanorod surface, providing additional sites for metal deposition. Three growth stages are observed when Au growth is performed under air:  (1) Au nanocrystal formation at both nanorod tips, (2) growth onto defect sites on the nanorod surface, and finally (3) a ripening process in which one nanocrystal tip grows at the expense of the other particles present on the nanorod. Analysis of the hybrid nanostructures by high-resolution TEM shows that there is no preferred orientation between the Au nanocrystal and the CdS nanorod, indicating that growth is nonepitaxial. The optical signatures of the nanocrystals and the nanorods (i.e., the surface plasmon and first exciton transition peaks, respectively) are spectrally distinct, allowing the different stages of the growth process to be easily monitored. The initial CdS nanorods exhibit band gap and trap state emission, both of which are quenched during Au growth.