Singlet oxygen (1O2) generated upon photostimulation of photosensitizer molecules is a highly reactive specie which is utilized in photodynamic therapy. Recent studies have shown that semiconductor nanoparticles can be used as donors in fluorescence resonance energy transfer (FRET) process to excite attached photosensitizer molecules. In these studies, their unique properties, such as low nanoscale size, long-term photostability, wide broad absorbance band, large absorption cross section, and narrow and tunable emission bands were used to provide advantages over the traditional methods to produce singlet oxygen. Previous studies that achieved this goal, however, showed some limitations, such as low FRET efficiency, poor colloidal stability, nonspecific interactions, and/or complex preparation procedure. In this work, we developed and characterized a novel system of semiconductor quantum rods (QRs) and the photosensitizer meso-tetra(hydroxyphenyl) chlorin (mTHPC), as a model system that produces singlet oxygen without these limitations. A simple two-step preparation method is shown; Hydrophobic CdSe/CdS QRs are solubilized in aqueous solutions by encapsulation with lecithin and PEGylated phospholipid (PEG–PL) of two lipid lengths: PEG350 or PEG2000. Then, the hydrophobic photosensitizer mTHPC, was intercalated into the new amphiphilic PEG–PL coating of the QR, providing a strong attachment to the nanoparticle without covalent linkage. These PEGylated QR (eQR)–mTHPC nanocomposites show efficient FRET processes upon light stimulation of the QR component which results in efficient production of singlet oxygen. The results demonstrate the potential for future use of this concept in photodynamic therapy schemes.

Hybrid semiconductor–metal nanoparticles are interesting materials for use as photocatalysts due to their tunable properties and chemical processibility. Their function in the evolution of hydrogen in photocatalytic water splitting is the subject of intense current investigation. Here, the effects of the surface coatings on the photocatalytic function are studied, with Au‐tipped CdS nanorods as a model hybrid nanoparticle system. Kinetic measurements of the hydrogen evolution rate following photocatalytic water reduction are performed on similar nanoparticles but with different surface coatings, including various types of thiolated alkyl ligands and different polymer coatings. The apparent hydrogen evolution quantum yields are found to strongly depend on the surface coating. The lowest yields are observed for thiolated alkyl ligands. Intermediate values are obtained with L‐glutathione and poly(styrene‐co ‐maleic anhydride) polymer coatings. The highest efficiency is obtained for polyethylenimine (PEI) polymer coating. These pronounced differences in the photocatalytic efficiencies are correlated with ultrafast transient absorption spectroscopy measurements, which show a faster bleach recovery for the PEI‐coated hybrid nanoparticles, consistent with faster and more efficient charge separation. These differences are primarily attributed to the effects of surface passivation by the different coatings affecting the surface trapping of charge carriers that compete with effective charge separation required for the photocatalysis. Further support of this assignment is provided from steady‐state emission and time‐resolved spectral measurements, performed on related strongly fluorescing CdSe/CdS nanorods. The control and understanding of the effect of the surface coating of the hybrid nanosystems on the photocatalytic processes is of importance for the potential application of hybrid nanoparticles as photocatalysts.

Tuning of the electronic properties of presynthesized colloidal semiconductor nanocrystals (NCs) by doping plays a key role in the prospect of implementing them in printed electronics devices such as transistors and photodetectors. While such impurity doping reactions have already been introduced, the understanding of the doping process, the nature of interaction between the impurity and host atoms, and the conditions affecting the solubility limit of impurities in nanocrystals are still unclear. Here, we used a postsynthesis diffusion-based doping reaction to introduce Ag impurities into InAs NCs. Optical absorption spectroscopy and analytical inductively coupled plasma mass spectroscopy (ICP-MS) were used to present a two-stage doping model consisting of a “doping region” and a “growth region”, depending on the impurity to NC ratio in the reaction vessel. X-ray absorption fine-structure (XAFS) spectroscopy was employed to determine the impurity location and correlate between the structural and electronic properties for different sizes of InAs NCs and dopant concentrations. The resulting structural model describes a heterogeneous system where the impurities initially dope the NC, by substituting for In atoms near the surface of the NC, until the “solubility limit” is reached, after which the rapid growth and formation of metallic structures are identified.

Semiconductor nanocrystals exhibit unique fluorescence properties which are tunable in size, shape and composition. The high quantum yield and enhanced stability have led to their use in biomedical imaging and flat panel displays. Here, semiconductor nanorod based inkjet inks are presented, overcoming limitations of the commonly reported quantum dots in printing applications. Fluorescent seeded nanorods were found to be outstanding candidates for fluorescent inks, due to their low particle–particle interactions and negligible self-absorption. This is manifested by insignificant emission shifts upon printing, even in highly concentrated printed layers and by maintenance of a high fluorescence quantum yield, unlike quantum dots which exhibit fluorescence wavelength shifts and quenching effects. This behavior results from the reduced absorption/emission overlap, accompanied by low energy transfer efficiencies between the nanorods as supported by steady state and time resolved fluorescence measurements. The new seeded nanorod inks enable patterning of thin fluorescent layers, for demanding light emission applications such as signage and displays. 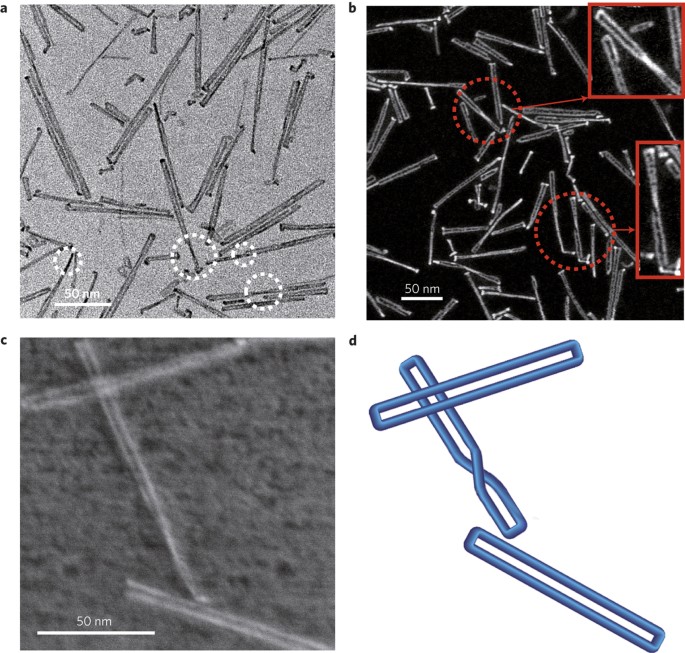 The dynamic process of energy transfer from semiconductor nanocrystals acting as donors to multiple acceptors attached to their surface emerges as an important tool for probing the nanoparticle environment in the nanometric scale. Understanding the underlying principles which govern the dynamics of the energy transfer process, and in particular the role of the shape and dimensions of the nanocrystal in determining it, is crucial for utilizing it for a range of applications including sensing, biolabeling, and energy funneling. We describe and theoretically analyze the temporal behavior of energy transfer from core/shell spherical dot, dot in a rod, and dot in a pod nanocrystals to multiple acceptors linked to their surface. Using a modified restricted geometries model, we evaluate the different parameters which affect the energy transfer and demonstrate the role of the nanocrystal geometry and dimensions in determining the dynamics of the energy transfer process. The modeled dynamics show good agreement to experimental data measured for spherical and dot in a rod nanocrystals. The results obtained from the model indicate that energy transfer may be used for extracting the dimensions and dimensionalities of nanocrystals and for probing real-time processes in the ensemble level, which are relevant for characterization and sensing applications.