The development of two-dimensional magnetic Van der Waals (vdW) materials produced by exfoliating bulk single crystals opened vast and exciting research areas in spintronic and solid-state physics. CrGeTe3, is a leading example of a 2D vdW magnetic insulator, which holds magnetism up to two layers. In this work, we apply state of the art nano SQUID-on-tip (SOT) microscopy and in-situ magneto-transport measurements of CrGeTe3/NbSe2 bilayers to provide detailed experimental research on the magnetic properties of CrGeTe3. We generate a thickness-dependent magnetization-state diagram of bare thin flakes and identify a critical thickness of ~10 nm below which we observe hard ferromagnetism.

One of our key findings is the discovery of difference in magnetization between the film interior and its edge at zero field. We observed the formation of magnetic domains at the sample interior while the edge holds its magnetization at zero field. The out-of-plane field resolved at the edge is localized and was never observed before, and could be imaged here owing to the unique capabilities of the scanning SOT technique.

In addition, we explain the emergence of a switching effect between a zero-voltage and finite-voltage state in CrGeTe3/NbSe2 heterostructure. In combination with the thickness-dependent magnetization-structure study, it follows that the switching is tunable by carefully choosing the thickness of the magnetic flake. This novel mechanism holds the promise to realize new types of magnetic memory and spintronic devices. 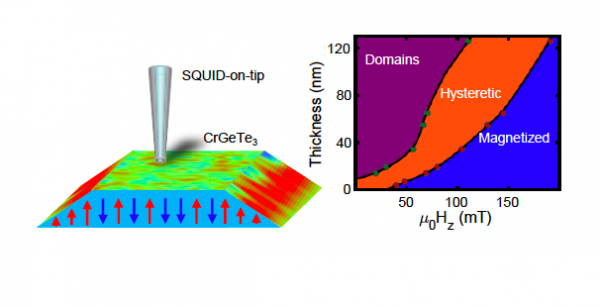 Illustration of the local magnetic structure at the edges and in the interior of CrGeTe3 flakes. Right panel: local magnetic structure and the resulting out-of-plane magnetic image \(B_z (x,y)\) at zero applied field for samples thicker than 10 nm. The edges retain their magnetization unlike the sample’s interior. The magnetization direction of the edge at zero field depends on the field history. Left panel: A thickness-dependent magnetization-state diagram of CGT showing three states: domains (purple), hysteretic (orange), and magnetized (blue).

Magnetic exchange bias, an asymmetric hysteresis curve, is essential to solid-state technologies that require spin valves or non-volatile magnetic memory. This phenomenon is typically studied within the context of magnetic interfaces between antiferromagnets and ferromagnets. There, the exchange field of the former pins the polarization of the latter. Consequently, the exchange bias is a static property of the interface.

By contrast, in the present study, we reveal a non-trivial memory effect and tunability of the exchange bias in Co3Sn2S2. Using state of the art magneto-transport measurements and in situ scanning nano-SQUID-on-tip microscopy, our data provides clear experimental evidence that a hidden spin-texture is driving a finite exchange bias in this material. This novel material property can play a key role in the realization of new types of magnetic memory and spintronic devices.

More concretely, we find that the exchange bias, in magnitude and sign, sensitively depends on the magnetic history in both in- and out-of-plane magnetic field and also on the sample size. Our findings indicate that the magnetic domain wall structure and the underlying magnetic frustrations play a dominant role in establishing the exchange bias. This is a novel mechanism for the creation of exchange bias that was never observed before.

Our findings present the visualization of domain walls and their link to the hidden texture and the appearance of exchange bias sheds light on a possible new mechanism underlying the exchange bias phenomenon in single-phase materials. 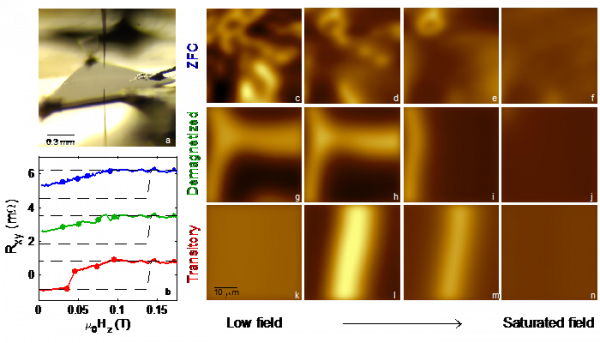 Utilizing the SQUID-on-tip, we resolve the current distribution through a thin layer of superconductor which is proximitized to a ferromagnetic insulator. Our goal is to map the current distribution and provide experimental evidence that would give good insight into the actual microscopic effect at the interface. We observed non-uniform current distribution that does not agree with the standard supercurrent distribution in the absence of the ferromagnet (see below). This provides insight into a new physical phenomenon that emerges when we introduce ferromagnetic order. Theoretical predictions hint at a significant proximity effect, which is possibly manifested in the creation of spin-triplet cooper pairs near the interface. This possibility (which must be further investigated) can be of great importance to the development of superconducting spintronic devices, a means of which to transport spin (and charge) through a device without any energy loss.