Many of the characteristics facilitating this are related to the molecular 3D structure, determining their specificity in most cases. However, these are macro-molecular machines, with moving parts that serve the execution of function. Without the ability to move and change structure, proteins would not be able to facilitate the chemistry of maintaining life.

Although we understand the structural aspect of protein systems, their structural dynamics and how it facilitates their activity is known to us mostly from computational simulations and there are very few experimental techniques shedding light on these characteristics with high spatial & temporal resolution.

The Lerner laboratory is dedicated to the direct measurement of these protein dynamics characteristics one protein at a time.

We study the molecular mechanisms that promote bacterial resistance to antibiotics, through dynamic structural changes in the DNA transcription complex. Additionally, we study the structure-function relationship in proteins that on one hand are considered unsturctured or intrinsically disordered, but on the other hand are capable of carrying multiple distinct functionalities.

In many cases, the powerful tools of structural biology fail to retrieve the structures of proteins in specific conformational states serving specific stages in the overall function.

Single-molecule fluorescence spectroscopy experiments facilitate sorting different bio-molecular species according to their inter-atomic distances, rotational freedom, binding stocihiometry, and many other parameters that influence fluorescence. Using this sorting capabilities we uncover unique conformational states of protein systems, that have not yet been structurally characterized. We than combine the experimental data with structural modeling to retrieve 3D structure models of these conformational states.

Using this approach, we identify the different unique conformations of the protein alpha-Synuclein in its monomeric and dimeric stages. Interestingly, we identify structures within these conformational states that resemble the structure of the alpha-Synuclein subunit in different complexes that have been documented earlier using X-ray crystallography. While some of these precursor structures promote alpha-Synuclein's physiological functions in neuronal pre-synaptic clefts, other precursor structures promote its pathological functions related to the molecular determinants of Parkinson's Disease. Our goal is to study these precursor structures to enable the rational-design of inhibitors that will minimize the cellular damage linked to Parkinson's Disease.

Additionally, using this approach, we are characterizing the structure of the transcription initiation complex in specific conformational states to which antibiotics do not bind with high affinity. The goal of this study is to use the retrieved structure models to understand what are the mechanisms by which DNA transcription can still occur, even if it should be inhibited by antibiotics.

Characterization of biomolecular species that may promote Parkinson's Disease early on

A well-known molecular feature that is associated with Parkinson's Disease (PD), is the accumulation of amyloid fibrils of the protein alpha-Synuclein in Lewy bodies, inside neurons of the Substantia Nigra. Alpha-Synuclein is an intrinsically-disordered protein (IDP). As is the case with many other IDPs or proteins with intrinsically disordered regions (IDRs), the disordered, or better put structurally unstable regions tend to find alternative ways to fold, usually coupled to binding another bio-molecule. In some cases, the alternative folding is coupled to binding of the same protein in an oligomerization process. In some cases, these oligomers reach a finite size, however in others, oligomer keep growing and sometimes form nuclei of amyloid fibrils.

While ful amyloid fibrils of alpha-Synuclein are molecular characteristics associated with PD, specific small-sized oligomers have the capacity to bind to membrames and form many different species, some are important for proper function of pre-synaptic Dopamine vesicles pores, while others might may lead to neuronal toxicity linked to PD. Another feature of this multi-functionality is that some of the structural organizations of alpha-Synuclein in these higher-order complexes might be existing also in the ensemble of structures the alpha-Synuclein monomer, dimer or short oligomers explore.

Using multiple single-molecule fluorescence techniques together with high-information content mass-spectrometric techniques together with experimentally-restrained structural modeling, we structurally characterizing species of the alpha-Synuclein monomer, dimer and other small oligomers and compare the resulting 3D structure models to the ones existing in the alpha-Synuclein subunit of higher order organizations. The fine structure of these species assists in the rational design of small molecules that will inhibit the formation of specific higher order alpha-Synuclein organizations, with the aim to minimize the molecular processes that are associated with PD. 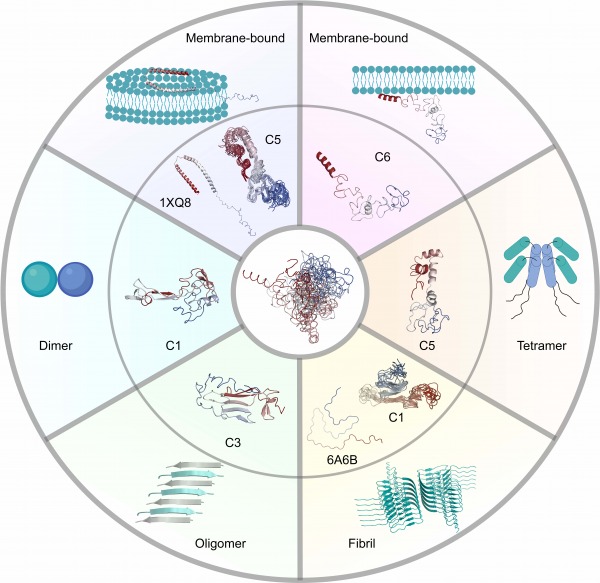 The pre-genetic mechanism of antibiotic resistance

Antibiotic molecules induce a dual effect on their molecular targets: while they specifically bind to their target molecules (a specific bacterial protein) and inhibit its activity, they also induce an environmental response by the bacteria, eventually leading to genetically-driven resistance to these antibiotics. In turn, natural selection of these genetic alterations sometimes lead to gain of function and lack of inhibition by the antibiotic molecule. The question is, what is the mechanism by which an antibiotic molecule that is supposed to inhibit DNA transcription, allows bacteria to keep living long enough to induce the environmental change leading to antibiotic resistance?

In acute conditions of Tuberculosis infection, antibiotics from the Rifamycin family are used for the specific inhibition of DNA transcription in bacteria. These antibiotic molecules bind with high affinity to one structure of the bacterial DNA transcription complex.

The transcription complex encompasses many different structures that are dynamically changing. Some of these structures allow transcriptional activity without the inhibition of Rifamycins. The problem is that these alternative dynamic structures are not abundant, and therefore were not yet characterized.

We characterize these dynamic structures using the combination of Single-molecule fluorescence spectroscopy, high information content mass-spectromewtric techniques and computational simulations, with the aim: understanding the mechanisms of alternative transcriptional function in the presence of antibiotics.This will assist us in establishing the structural basis required for rational ldesign of alternative antibiotics that will minimize the time window through which vacteria adapt, genetically change and develop resistance.

Development of methods for Biochemistry, Biophysics and Diagnostics

One of the most common uses of the FRET <10 nm sensitive ruler is to identify protein-protein interactions in fluorescence imaging.

Assume we suspect proteins A & B interact in the cell. Imaging them as they interact can be classically achieved by genetically fused fluorescent proteins (FP) to protein A & to protein B. The two FPs fused to proteins A & B serve as donor & acceptor of FRET. This assay works well in the case of strong interactions between proteins A & B. Many such A & B proteins will be found together (in within the FRET distance range) for long periods of time. However, if the results of the fluorescence imaging do not indicate proteins A & B are interacting, does it necessarily mean there are no pairs of interacting proteins A & B?

The case of weak interactions is a challenge in biology - we cannot necessarily infer from negative results of FRET imaging that there are necessarily no interactions. The best we can do is to claim that if there are interactions, there are just a few of them, and they are below the background of non-interacting proteins A & B. Indeed, if proteins A & B weakly interact, there will be short periods of time in which a few of them will be found together (in within the FRET distance range). This means each pixel of the microscopic image will include many proteins A & B that are not interacting, and maybe just a few that are interacting, so most of the signal will be of pure fluorescence with no signatures of FRET.

The Lerner lab is developing a new fluorescence imaging approach that will assist in elucidating these weakly-interacting proteins in FRET imaging. 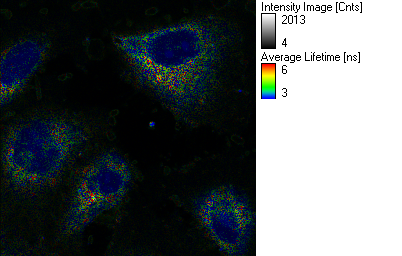 Bio-detection of specific intact viruses in minutes, at high sensitivities and with minimal false negatives

The outburst of the COVID-19 pandemic served as a global game changers in so many aspects. Many aspects of pandemic preparedness re-opened for scientific evaluation. One aspect that was under scrutiny was the current technologies with which we identify and quantify viral infections with high specificity and high sensitivity, as rapid as we possibly can. Rapid testing is viable to assist in bringing society back to normal life routine, with minimal viral exposure risks.

The most accurate testing technique is based on RT-PCR. The main drawback is the time it takes to get these accurate results (hours). There are alternative rapid testing approaches, including point-of-care tests. However, these tend to produce minutes-time results leaving many positive undetected, in what is better known as false negatives. This is due to the trade off between accuracy and sensitivity. Since viral loads of the COVID-19 can be quite low, rapid tests oftentimes leave high amount of false negatives that carry viral loads below the rapid detection schemes, and can only be accurately quantified with the RT-PCR based approach.

Like many research groups around the world, the Lerner lab was also intrigued by these questions. Using our unique know-how & experience, we have recently developed an approach to specifically detect intact viruses and to quantify low viral loads in less than 10 minutes, minimizing the rate of false negatives within symptomatics. The new technique is easy-to-use and affordable,and further developments will enable testing its potential use as a platform for accurate rapid testing. The technique is easily adaptable to viruses other than SARS-CoV-2.

This research is a collaboration with Prof. Dr. Thorben Cordes (LMU, Munich), Prof. Eran Zahavy (IIBR, Israel) and in consultation with Prof. Moshe Kotler and Dr. Alex Rouvinski (Haddassah Ein Kerem medical Campus, Hebrew U). This research is supported by Milner Foundation and by the ISRAEL SCIENCE FOUNDATION (grant No. 3565/20) within the KillCorona – Curbing Coronavirus Research Program.