"Electronic coupling and hence hybridization of atoms serves as the basis for the rich properties for the endless library of naturally occurring molecules. Colloidal quantum dots (CQDs) manifesting quantum strong confinement possess atomic-like characteristics with s and p electronic levels, which popularized the notion of CQDs as artificial atoms. Continuing this analogy

, when two atoms are close enough to form a molecule so that their orbitals start overlapping, the orbitals energies start to split into bonding and antibonding states made out of hybridized orbitals. The same concept is also applicable for two fused core–shell nanocrystals in close proximity. Their band edge states, which dictate the emitted photon energy, start to hybridize, changing their electronic and optical properties. Thus, an exciting direction of “artificial molecules” emerges, leading to a multitude of possibilities for creating a library of new hybrid nanostructures with novel optoelectronic properties with relevance toward diverse applications including quantum technologies.

The controlled separation and the barrier height between two adjacent quantum dots are key variables for dictating the magnitude of the coupling energy of the confined wave functions. In the past, coupled double quantum dot architectures prepared by molecular beam epitaxy revealed a coupling energy of few millielectron volts, which limits the applications to mostly cryogenic operation. The realization of artificial quantum molecules with sufficient coupling energy detectable at room temperature calls for the use of colloidal semiconductor nanocrystal building blocks. Moreover, the tunable surface chemistry widely opens the predesigned attachment strategies as well as the solution processing ability of the prepared artificial molecules, making the colloidal nanocrystals as an ideal candidate for this purpose. Despite several approaches that demonstrated enabling of the coupled structures, a general and reproducible method applicable to a broad range of colloidal quantum materials is needed for systematic tailoring of the coupling strength based on a dictated barrier

This Account addresses the development of nanocrystal chemistry to create coupled colloidal quantum dot molecules and to study the controlled electronic coupling and their emergent properties. The simplest nanocrystal molecule, a homodimer formed from two core/shell nanocrystal monomers, in analogy to homonuclear diatomic molecules, serves as a model system. The shell material of the two CQDs is structurally fused, resulting in a continuous crystal. This lowers the potential energy barrier, enabling the hybridization of the electronic wave functions. The direct manifestation of the hybridization reflects on the band edge transition shifting toward lower energy and is clearly resolved at room temperature. The hybridization energy within the single homodimer molecule is strongly correlated with the extent of structural continuity, the delocalization of the exciton wave function, and the barrier thickness as calculated numerically. The hybridization impacts the emitted photon statistics manifesting faster radiative decay rate, photon bunching effect, and modified Auger recombination pathway compared to the monomer artificial atoms. Future perspectives for the nanocrystals chemistry paradigm are also highlighted."

"Semiconductor Nanocrystals are Promising Photocatalysts for a wide range of applications, ranging from alternative fuel generation to biomedical and environmental applications. This stems from their diverse properties, including flexible spectral tunability, stability, and photocatalytic efficiencies. Their functionality depends on the complex influence of multiple parameters, including their composition, dimensions, architecture, surface coating, and environmental conditions.

A particularly promising direction for rapid adoption of these nanoparticles as photocatalysts is their ability to act as photoinitiators (PIs) for radical polymerization. Previous studies served to demonstrate the proof of concept for the use of quantum confined semiconductor nanocrystals as photoinitiators, coining the term Quantum PIs, and provided insights for their photocatalytic mechanism of action. However, these early reports suffered from low efficiencies while requiring purging with inert gases, use of additives, and irradiation by high light intensities with very long excitation durations, which limited their potential for real-life applications. The progress in nanocrystal syntheses and surface engineering has opened the way to the introduction of the next generation of Quantum PIs. Herein, we introduce the research area of nanocrystal photocatalysts, review their studies as Quantum PIs for radical polymerization, from suspension polymerization to novel printing, as well as in a new family of polymerization techniques, of reversible deactivation radical polymerization, and provide a forward-looking view for the challenges and prospects of this field."

"Epitaxial Growth of a Protective Semiconductor Shell on a colloidal quantum dot (QD) core is the key strategy for achieving high fluorescence quantum efficiency and essential stability for optoelectronic applications and biotagging with emissive QDs. Herein we investigate the effect of shell growth rate on the structure and optical properties in blue-emitting ZnSe/ZnS QDs with narrow emission line width. Tuning the precursor reactivity modifies the growth mode of ZnS shells on ZnSe cores

"The Recent Technological Advancements have greatly improved the quality and resolution of displays. Yet, issues like full color gamut representation and long lasting durability of the color emitters require further progression. Colloidal quantum dots manifest an inherent narrow spectral emission with optical stability, combined with various chemical processability options which will allow for their integration in display applications. Apart from their numerous advantages, they also present unique opportunities for the next technological leaps in the field."

"Robust Control Over the Carrier Type is fundamental for the fabrication of nanocrystal-based optoelectronic devices, such as the p–n homojunction, but effective incorporation of impurities in semiconductor nanocrystals and its characterization is highly challenging due to their small size. Herein, InAs nanocrystals, post-synthetically doped with Cd, serve as a model system for successful p-type doping of originally n-type InAs nanocrystals, as demonstrated in field effect transistors (FETs). 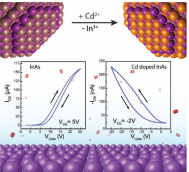 "This Roadmap on Nanotechnology for Catalysis and Solar Energy Conversion focuses on the application of nanotechnology in addressing the current challenges of energy conversion: 'high efficiency, stability, safety, 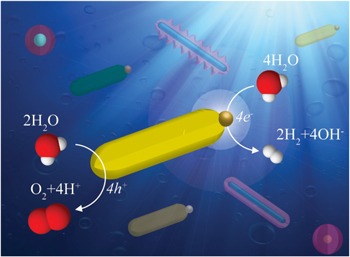 and the potential for low-cost/scalable manufacturing' to quote from the contributed article by Nathan Lewis. This roadmap focuses on solar-to-fuel conversion, solar water splitting, solar photovoltaics and bio-catalysis.  It includes dye-sensitized solar cells (DSSCs), perovskite solar cells, and organic photovoltaics. Smart engineering of colloidal quantum materials and nanostructured electrodes will improve solar-to-fuel conversion efficiency, as described in the articles by Waiskopf and Banin and Meyer. Semiconductor nanoparticles will also improve solar energy conversion efficiency, as discussed by Boschloo et al in their article on DSSCs. Perovskite solar cells have advanced rapidly in recent years, including new ideas on 2D and 3D hybrid halide perovskites, as described by Spanopoulos et al 'Next generation' solar cells using multiple exciton generation (MEG) from hot carriers, described in the article by Nozik and Beard, could lead to remarkable improvement in photovoltaic efficiency by using quantization effects in semiconductor nanostructures (quantum dots, wires or wells). These challenges will not be met without simultaneous improvement in nanoscale characterization methods. Terahertz spectroscopy, discussed in the article by Milot et al is one example of a method that is overcoming the difficulties associated with nanoscale materials characterization by avoiding electrical contacts to nanoparticles, allowing characterization during device operation, and enabling characterization of a single nanoparticle. Besides experimental advances, computational science is also meeting the challenges of nanomaterials synthesis. The article by Kohlstedt and Schatz discusses the computational frameworks being used to predict structure–property relationships in materials and devices, including machine learning methods, with an emphasis on organic photovoltaics. The contribution by Megarity and Armstrong presents the 'electrochemical leaf' for improvements in electrochemistry and beyond. In addition, biohybrid approaches can take advantage of efficient and specific enzyme catalysts. These articles present the nanoscience and technology at the forefront of renewable energy development that will have significant benefits to society."

"Silica Aerogel is a Solid Matrix, capable of preserving the unique properties of nanoparticles incorporated in it; forming a macroscopic structure that benefits from nano-metric properties. We developed a simple method for preparation of doped silica aerogels. Dopants are implemented as silica coated nanoparticles suspended in alcohol or alcohol:water mixture. This suspension replaces

a portion of the pure solvent in the one-step base catalyzed silica aerogel recipe. Aerogels doped with, Au nano-spheres, Ag nano-platelets, and CdSe/CdS core/shell quantum dots, were prepared. These aerogels exhibit homogeneous mono-dispersion of the nanoparticles, and possess the nanoparticles' unique optical properties. Additionally, doping does not affect the gelation process or the silica matrix. We envision that using this methodology, many other silica coated nanoparticles can be implemented as dopants. Furthermore, complex systems of several co-dopants can be obtained in a reproducible manner. Such aerogels can be tailor made for a vast range of applications."

"The Surface Ligands of Semiconductor Nanocrystals (NCs) are central for determining their properties and for their flexible implementation in diverse applications. Thus far, the thermodynamic characteristics of ligand exchange reactions were attained by indirect methods. Isothermal titration calorimetry is utilized to directly and independently measure both the equilibrium constant and the reaction enthalpy of a model ligand exchange reaction from oleate-capped CdSe NCs

to a series of alkylthiols. Increased reaction exothermicity for longer chains, accompanied by a decrease in reaction entropy with an overall enthalpy–entropy compensation behavior is observed, explained by the length-dependent interchain interactions and the organization of the bound ligands on the NCs’ surface. An increase in the spontaneity of the reaction with decreasing NC size is also revealed, due to their enhanced surface reactivity. This work provides a fundamental understanding of the physicochemical properties of the NC surface with implications for NC surface ligand design."

The tunneling spectra, measured in the double-barrier tunnel junction configuration, reveal the effect of quantum confinement on the band gap taking place mainly through a blue-shift of the conduction band edge, along with a signature of 2D electronic structure intermixed with finite lateral-size and/or defects effects. The STS fundamental band gaps are larger than the optical gaps as expected from the contributions of exciton binding in the absorption, as confirmed by theoretical calculations. The calculations also point to strong valence band mixing between the light- and split-off hole levels. Strikingly, the energy difference between the heavy-hole and light-hole levels in the tunneling spectra are significantly larger than the corresponding values extracted from the absorption spectra. Possible explanations for this, including an interplay of nanoplatelet charging, dielectric confinement, and difference in exciton binding energy for light and heavy holes, are analyzed and discussed."

"Quantum Dots Offer Superior Optical Features and hold a great potential as an imaging tool in comparison to ‘conventional’ fluorescent dyes. However, in vivo application in inflammatory-associated disorders is limited due to potential toxicity following systemic administration. Vascular inflammation contributes to cardiovascular diseases such as restenosis (re-narrowing of the artery following angioplasty), and poor

prognosis is associated with the increased number of monocytes-derived macrophages (MDMs) in the arterial wall.  Local administration of a suitable delivery system targeting MDMs could provide effective fluorescent imaging while minimizing systemic exposure and toxicity. We report here on the physicochemical characteristics and the structural stability of MDMs-targeted liposomal QDs (LipQDs), cellular uptake and cytotoxicity, the systemic biodistribution of LipQDs following local intra-luminal administration of LipQDs in carotid-injured rats vs. systemic administration, and imaging of QDs in the arterial tissue. The local treatment with LipQDs was found to be a suitable approach for targeting QDs to MDMs in the injured artery. In contrast to free QDs, the LipQDs formulation exhibited unique properties including structural and fluorescent stability, increased accumulation and retention for up to 24 h, and targeting properties enabling imaging of MDMs. MDMs imaging by targeted nanoparticles (NPs) could potentially serve for the detection of MDMs density in the injured artery for diagnostic purposes."